India is known for its varied cuisine, a large part of which consists of traditional Indian breads. These breads may be made from milled flour, either atta or maida, or from rice and lentils. They are intrinsically linked to the cuisine of the part of India they originate from. Here’s a look at some of the most common traditional breads of India. 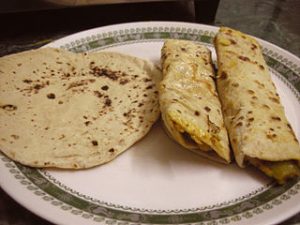 This is the most popular Indian flat bread, also known as chapati. It is made from wheat flour or atta. The roti is an unleavened bread which is made on an iron griddle known as the tawa. It is a staple Indian dish which is commonly eaten with curries or a vegetable preparation.

This traditional Indian flatbread is more common in North India. The word ‘paratha’ literally means layers of cooked dough. These unleavened flatbreads are first cooked on the tawa and then lightly fried. They are commonly cooked in the Indian vegetable oil or ghee to give it a wonderful aromatic smell. Parathas may be plain or filled with a layer of mashed potatoes,cauliflower, or simply mixed vegetables, or other interesting ingredients.

There is no end to the types of parathas that can be created. Some common types include methi paratha (with fenugreek leaves), paneer paratha (with a cottage cheese filling), laccha paratha (a layered paratha), or even lasuni paratha (a garlic flavoured one). Parathas may be consumed with pickles, yoghurt, or vegetable curries.

This is a traditional dish from Kerala made from fermented rice batter and coconut milk. Appams are also very popular in the neighbouring state of Tamil Nadu. This white coloured pancake is extremely soft and melts in the mouth easily. It is commonly eaten with a vegetable or mutton stew.

This traditional Indian pancake, made from a rice and urad dal batter, is popular in the south Indian states of Karnataka, Kerala, Andhra Pradesh, Telegana, and Tamil Nadu. Once the batter has fermented, it is spread out thinly on a flat Indian tawa and fried. Dosas are served with chutney and sambar.

This traditional North Indian bread, slightly thick in nature, is baked in the oven or the traditional Indian tandoor. It is also cooked in ghee, which gives it a wonderful smell apart from making it soft in nature. Naans may be plain or stuffed with a filling of minced meat (keema naan) or potatoes and a combination of spices (amritsari kulcha). Naans are eaten with traditional Indian curries and vegetable preparations.