India has adopted several national symbols to consolidate its identity and to demarcate certain common elements that can unite the people together. These national symbols were adopted at different moments in history and their identity has been preserved carefully. Each symbol stands for something deeper and embodies characteristics that stand for the nation. Here is an outline of India’s official symbols:

The National Flag of India 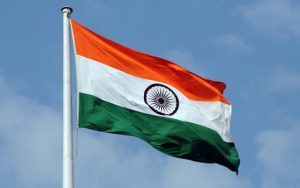 The national flag of India is a tricolour flag with a band of saffron on top, followed by a band of white and a band of green. Each of these horizontal bands are equally thick. While saffron symbolizes strength and integrity, white symbolizes peace and green symbolizes vitality and freshness. There is a blue Ashoka Chakra (wheel) in the centre of the white band. There are twenty four-strokes of this chakra which symbolize the wheel of life and death. This flag was adopted by the Constitutent Assembly on 22 July 1947 and it is a deeply revered Indian symbol.

The National Emblem of India

India’s national emblem has been adapted from the Lion Capital of Ashoka at Sarnath. It depicts three majestic lions standing back to back on an abacus. The centre of the abacus contains a wheel. On either side of the wheel there are two animals. There is a bull on the right and a galloping horse to the left, with outlines of two more wheels visible on their outer sides. While the lions symbolize pride and courage, the animals on the lower side symbolize life and inspiration. India’s national emblem is seen on Indian currency and in official documents.

The National Anthem of India

India’s national anthem is ‘Jana Gana Mana’. It was composed by the Nobel laureate Rabindranath Tagore. This song was adopted as the national anthem by the Constitutent Assembly on 24 January 1950. It was originally written in Sanskritized Bengali. This song pays tribute to the country while mentioning different regions (such as Punjab, Sindh, Gujarat, Maratha) to emphasize unity in diversity. Whenever the national anthem is about to be sung, Indians stand up in respect and they continue to stand at attention while they sing it.

The National Song of India

India also has a national song called ‘Vande Mataram’ which was written by Bankim Chandra Chattopadhyay. During the freedom struggle, this song really motivated the Indians to keep striving for the independence of their country. When the Indian National Congress met at the 1896 session, this song was sung for the first time. There have been many versions to this song by eminent singers and musicians and each time this song has managed to captivate the Indian audience.

The National Animal, Bird and Flower of India

India’s national animal is the royal Bengal tiger. This majestic animal has a deep orange coat with black stripes. The tiger is known for his admirable courage and grace and is hence chosen as the national animal. India’s national bird, the peacock, is no less attractive. When it spreads out its feathers and dances, none can rival its brilliance and grace. The national flower of India is the lotus. With its overlapping petals, it looks beautiful as it floats on water. This flower is used in many religious ceremonies. It symbolizes purity—though it grows in slushy areas, it retains its pristine look.

The National Tree and Fruit of India

India’s national tree is the Banyan tree. Its roots spread far and wide and it offers shade to innumerable travellers, protecting them from the harsh rays of the sun. In villages, the banyan tree is often the meeting-point for important discussions. Many intellectuals attained enlightenment under this tree. For all these reasons, this tree is one of India’s symbols. India’s national fruit, the mango, is available during the hot summer months. It finds mention in many ancient texts. Mangoes are available in many varieties and sizes.

All these national symbols help the Indians to think of themselves as one. As the country marches forward to further developments, they are a keen reminder of all the characteristics that must always endure in India.