One of the biggest Indian festivals celebrated around October/November of each year is Diwali. Also known as Deepavali, this ‘festival of lights’ celebrates the triumph of good over evil, symbolically represented by the lamps that illuminate people’s homes. Hindus celebrate Diwali for four to five days although in South Africa, the focus is only on the main festival which falls on the night of the new moon in the Hindu month of Kartik.

There are many stories behind the significance of Diwali and it may also vary by regions in India. According to The Ramayana (one of the holy texts of Hinduism), this festival celebrates the return of Lord Rama, his wife Sita, and brother Lakshmana to Ayodhya after vanquishing the demon king Ravana.

To celebrate their homecoming, it is believed that the people of Ayodhya lit lamps and burst crackers. Diwali is also associated with the worship of Goddess Lakshmi, who is the benefactress bestowing wealth and prosperity among devotees. The five days of the festival celebrate her birth, and her marriage to Lord Vishnu.

Among the Jains, this period marks the time when Lord Mahavira attained moksha, and they celebrate the triumph of knowledge and awareness over ignorance. In eastern India, people worship Goddess Kali, the powerful deity also associated with the destruction of ill.

Although Diwali is considered to be the biggest event for the South African Hindu community, local celebrations often pale in comparison to those in India. In the weeks leading up to Diwali, people ensure that all their home renovations and last-minute cleaning sprees are over. Outside the house, shopping areas and malls are busy with eager shoppers who are looking for their Diwali outfits.

Each of the four to fiver days of the festival has different preparations, activities and rituals associated with it in India. Dhanteras is the day when people purchase gold or silver items as a token of the prosperity and material well-being of their families. 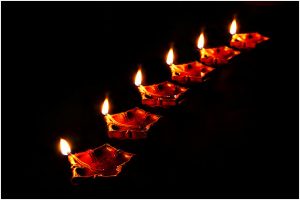 The second day is Naraka Chaturdasi, more commonly known as Chhoti Diwali. On this day, colourful rangoli patterns are made at home, and women apply mehendi on their hands. Preparations are made at home to usherin the festival. The ladies of the house are usually busy preparing sweets and snacks for the festival.

Lakshmi puja (a prayer ceremony) takes place on the third day of the Diwali celebrations. Along with goddess Lakshmi, Lord Ganesh and Saraswati are also worshipped. Lamps are lit to welcome to Gods into people’s homes so that they may bless them.

On the night of Diwali, people wear new clothes and prepare to meet with family and close friends often to enjoy the festival together. Homes are decorated with lamps and twinkling lights. A prayer is held at home, following which the focus is mainly on the fireworks and related festivities.