Among the fashion designers at the New York Fashion Week 2015, debutant Anna Malika’s story is probably the most inspiring. This 29-year-old fashion designer of Indian descent is using the medium of fashion design to raise awareness about sex trafficking and help women who have been a victim to it.

Anna is no stranger to this issue of great global concern. As a teenager, she was abused sexually, physically, and emotionally by a 40-year-old man who, on the pretext of taking photographs of her for a purported ‘art project’, sold pornographic images of her and other girls. 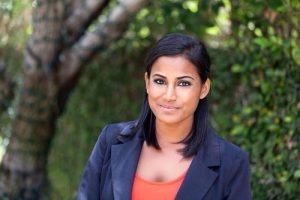 Fortunately, Anna was able to get out of the clutches of her trafficker but she started drinking heavily, developed eating disorders, and faced a personality crisis. After attending a rehabilitation program for three years, Anna was able to renew her self-worth and pick up the threads of her life.

She teamed up with designers of the fashion brand Elegantees, based in New York, which also curates The Nepali Rescue Project, a sewing organization in Nepal which hires victims of sex trafficking as seamstresses. Anna’s collection at the fashion week was very aptly named ‘Freedom Is the New Beautiful’.

Anna’s designs reflect her own personal choices. She used pearls in her collection and explained her preference for them. “I’ve always loved pearls, and see them as symbolic to my story and life through fashion and beauty. Pearls go through a process where they are ugly and dark for a period of time, but with refining and restoration, they become what everyone knows them for and they shine in glory,” she said.

The proceeds from Anna’s clothing line will be used in running operations of safe homes and to increase job prospects for more women with a similar past. Although many women are thankfully saved from sex trafficking, they often face a lack of employment opportunities, making their rehabilitation process difficult.

Against this background, Anna’s efforts seem even more commendable, serving as an inspiring example of persistence against the odds. Anna also delivers talks and serves as a consultant to other organizations which try to help survivors of sex trafficking. She is keen that other women receive after-care just like she did, so that they too can lead lives of dignity.